Be Strong, Be Kind

The deload week is a rather simple concept.  An athlete or lifter needs periodic breaks of lower stress and intensity so that overreaching, and its evil cousin, overtraining don’t take up residence.  Overreaching and overtraining not only derail progress, they can also lead to injury. However, deloading also forces the motivated athlete to periodically lower the stress and intensity that keeps them at the top of their game. So, the question becomes, why take time off if you don’t need time off?

A typical prescription for deloading is the “3 on, 1 off” plan.  During weeks 1-3, the strength athlete pushes hard, whatever that means, and then deloads during week 4.  The typical prescription I’ve read for deload weeks:  don’t lift over 60-70% of rep max, keep the reps above 5, no max effort singles, main lifts only, and if in doubt, take it easier rather than harder. 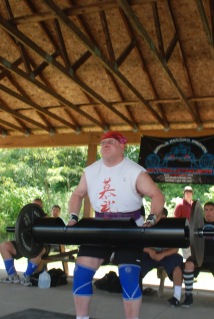 Many lifters have successfully followed such a template, and achieved good results.  As an older lifter – I’m now in the 50 club – , I was convinced that I had to follow this approach:  I tried not doing it, and would feel buried.  But I wasn’t happy.  Every time I came back into the gym after a deload week, it felt like I was starting from scratch.  I spent some time thinking about what that subjective feeling was telling me, and I came to the conclusion that it was telling me I had forgotten what it was like to “strain” under heavy weight.
This was a revelation.  I had now identified a particular skill that suffered during the deload.   But, what to do about it?

There’s been a lot of debate on various Internet forums about the role of “The CNS” in lifting.  Usually, this topic comes up in discussions about fatigue, with a lifter saying “My CNS is fried.”  The reasoning goes something like this:  look at competitive powerlifters.  During a typical meet, a powerlifter attempts 9 lifts.  That’s nothing in terms of volume (stress), but the lifts are max effort, high intensity.  Powerlifters typically report feeling exhausted after a meet, and having to take a week or more away from the gym to recover.  It can’t be stress that’s done this.  So, it must be their CNS is overtaxed.

Now, in fact, a powerlifter’s CNS might well be overtaxed after a meet.  However, the above line of reasoning ignores some critical factors:  while only 9 lifts are attempted, these lifts are all attempted in a heightened state of arousal.  The lifter has also just completed a rather long and challenging training cycle leading up to these lifts.  In addition, there are a lot of psychological and emotional investment made, just as there is for any big event in a person’s life.  All these factors, along with all the other daily stress of work, relationships – that little thing called “life” – contribute to stress levels.

To ignore all these other factors, and reach the conclusion that 9 lifts “fry the CNS” is a pretty big leap.  Given the results of athlete-coaches like Mike Tuchscherer, John Broz, and Matt Perryman, I began to really wonder about the wisdom of “No ME work” in a deload week – especially since it seemed like this was exactly the skill that suffered the most from a break.

I started to experiment with a new deload technique:  one that, for lack of a better word, I’ll call the “fun” deload.  Rather than avoid the work I like the most (lifting heavy things), and letting that key skill become detrained, I started picking one or two movements that I wanted to max out on, or do overload work on, during my deload week.  I might, for example, put more weight on the log than I can press, and work up to a max effort clean from the ground, practicing swinging heavier weight than normal, and having that heavy weight up on my chest, having to maintain body stability and breathing while under it.

I might decide to go a new max single on the axle press.  I might work on incorporating a new exercise, stone squats, and getting a feel for them.  The list goes on, but there’s a common theme: low rep ME work, limited in volume, and something that I find fun.  During a typical deload week, I’ll train heavy like this two days, do prehab/rehab work two days, and get in steady state conditioning work in the form of 30-60 minute walks as frequently as daily.

In this case, I think a huge part of the deload is simply getting a break from the programmed structure of the macrocycle template. When I’m getting ready for a competition, every week’s work is planned out. Before I step foot in the gym I know what I’m going to be doing, down to the number of reps in each set and the intensity level. This discipline is required; nonetheless, it’s mentally fatiguing. Introducing a little bit of “play” into my deload weeks gives me a nice psychological break and prepares me mentally to get back to the heavy lifting.